Loading carbohydrates properly can be the difference between first and last.

Have you ever wondered why some days your training is just off-the-charts great and the rest are the same old thing? Well, on those great workout days when you were stronger and felt you could go forever, you simply, and probably by accident, ate correctly.

Fill your tank so you can go faster and longer

Let’s say your car has a 10-gallon gas tank and you put in 8 gallons. When you’ve used around 7.5 gallons you would start to sputter until you completely run out of gas. And you obviously did not travel as far as 10 full gallons would take you unless you moved VERY SLOWLY.

Now let’s say you fill your tank to 10 gallons every day. Each day you can now travel the full distance and over time a far greater total distance than the above example because each day’s full mileage builds on the previous.
Let’s take it one step further. What if you could expand your fuel tank to 15 gallons on Race Day?! Your car can now move faster while also traveling further before running out of fuel. That’s what carbohydrate loading does for the athlete — expands your fuel tank so YOU can go faster AND longer!

Your workout potential is based on your fuel potential
Just as the car can travel faster and further each day on a full tank, every workout should build off the previous so that you avoid plateaus or, worse, decreases in performance. The latter is generally blamed on overtraining but almost 100% of the time it’s under-nutrition. If your body holds 5LBS of fuel (stored glucose/glycogen) and you only put in 4, your daily potential is limited to the actual fuel supply. Worse, under-nutrition reduces recovery potential, meaning the next workout can’t be any better and may be less productive, especially if you only put back 3LBS of energy. Anyway you get the point: fill the energy stores everyday to maximize each training session and add a “reserve tank” for Race Day – read on.

As we learned in previous articles, dietary carbohydrates are directly responsible for the amount of glycogen (stored energy) stored in the body and thus directly impact the athlete’s ability to perform both anaerobic and aerobic activities.

Anaerobic athletes
It’s well documented that most anaerobic athletes (e.g. football, sprint activities, weightlifting, etc.) consume fewer carbohydrates than needed to properly fuel the demands of the sport, often impeding their daily performance. In fact, the average male anaerobic athlete’s diet consists of 34-56% carbohydrate while females consume between 46 and 53%. Both are far below the recommended carbohydrate intake of 55-60% of daily total calories that is necessary to fill glycogen stores to daily capacity. The impairments in performance are most cited in activities lasting longer than 75 seconds or events that require repeated actions, such as weight lifting, football, basketball, interval training, etc.

Aerobic athletes
A similar shortcoming exists for the aerobic athlete. Males generally consume 44-65% carbohydrate, and females between 46-60% while the recommendations necessary for peak performance is always greater than 55%, or between 3-5.5 grams per pound of body weight. The gram per pound range is based on intensity; the more intense the training the higher the requirement for carbohydrate.

Daily carbohydrate requirements fill the tank so every workout counts

As long as both aerobic and anaerobic athletes maintain a daily carbohydrate intake of 55% or greater of their total daily caloric intake, their daily energy stores will NOT be the limiting factor in their daily training performance. In other words, they will have the fuel to maximize each day’s training session. And again, for high intensity endurance training, as for marathoners, tri-athletes, etc., preparing for events, carbohydrate intake can be as high as 70% of total caloric intake or up to 5.5 grams per pound of body weight.

Now, with the daily energy needs met for maximizing each training day, let’s get to the crux of this article: endurance athletes preparing for Race Day.

Carbohydrate loading is likely the oldest performance-enhancing strategy in endurance-type sports. Done properly, studies have shown that carb loading can help delay fatigue during endurance exercise by as much as 20 percent.1,2,3,4  This can be a significant advantage during games and competition. As in expanding a car’s fuel stores, the goal of carbohydrate loading is to significantly increase the amount of energy (glycogen) the body normally stores.  As we covered in previous articles, glycogen is stored in the liver and muscles and is broken down to glucose, which fuels the brain, nervous and muscular system.  Glucose is also necessary for fat to be utilized as energy in all activities.  During prolonged endurance events greater than 60-90 minutes (e.g. cycling, long distance running, triathlons) and sports that involve numerous repeated bouts of intense effort (e.g. tennis, soccer), glycogen becomes depleted, causing fatigue and leading to what endurance athletes refer to as “bonking” or “hitting the wall.” Generally, each 100 grams of muscle contains approximately 1.7 grams of glycogen. But carb-loading techniques can increase glycogen storage up to 4-5 grams per 100 grams of muscle!5

The most popular carbohydrate-loading technique requires that you first deplete your muscle glycogen stores by reducing your carbohydrate intake and exercise intensity for a few days. This is followed by a reloading phase over the next few days when you increase your carbohydrate intake and taper off exercise.  By following this protocol, the body will “super compensate” and store as much as two to three times the amount of glycogen (potential energy) than normal.  The result is extended/maximal muscle energy stores on the day of competition, allowing for optimal performance.  This loading method normally begins seven days prior to prolonged endurance events and tournaments with multiple games/matches lasting several hours. This technique is illustrated in the table below. 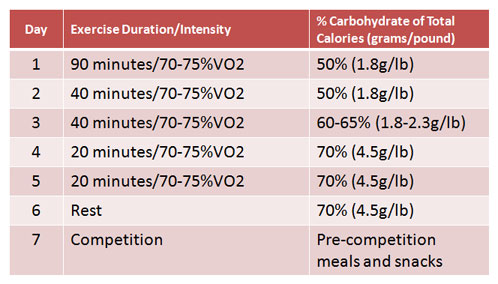 Test it Before You Use It

Keep in mind that glycogen is stored with water in a ratio of approximately 1 to 3-51, so the slight extra weight or feelings of “fullness” and “heaviness” often experienced with carb loading must be considered, especially if the athletic event is weight-bearing (e.g. running) as opposed to weight-supported (e.g. cycling). It is not recommended that you attempt any protocol for the first time prior to a major event. Experiment with above recommendation in your off season and if necessary modify it so you perform your best. In other words, this article gives you all you need to get started on properly filling and expanding your fuel tank, but only you can find YOUR energy “sweet spot” that gives you the energy potential to beat all your personal records.

Now get out there and make every training day count towards creating a perfect “Race Day”.